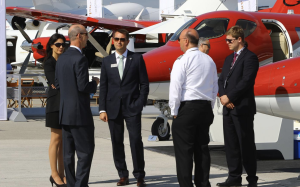 Many people who can afford to fly privately don’t travel enough to justify the cost of owning a jet, yet some of them buy one, anyway. Once they own the airplane and see it sitting on a lot, they might explore the possibility of sharing usage or ownership, though many jet buyers have no interest in sharing their aircraft with other people, no matter how little they use it.

For those who are interested, the challenges are often legal. Aviation is a highly regulated industry and presents special problems for 21st century business jet schemes based on car services like Lyft. Charging for air transportation generally requires a commercial certificate, which is much harder to do without than a taxi license. Some companies have tried to circumvent aviation regulatory requirements by availing themselves of FAA flight-sharing rules, but the results have been mixed at best. The FAA shut down Flytenow and Airpooler (see “A Flight-Sharing Scheme Collides with Federal Regulations”) and reportedly sent a warning letter recently to Blackbird Air, a similar program. Uber Copter, on the other hand, is a charter business offering flights operated by HeliFlite.

Flight sharing would help to fill the seats, but what about sharing ownership? The original innovator here was NetJets, which launched a program based on what seems to have been a creative reading of the FAA’s Part 91.501 regulations, where people could gain access to a whole fleet of aircraft on short notice by owning an undivided share of one of its jets. After years of controversy, and after the share programs retooled a bit to satisfy the FAA, the agency eventually issued regulations specifically allowing fractional programs. Jet cards and other charter-based programs like Wheels Up and VistaJet followed, allowing access to a fleet of jets without the need to own anything.

Fractional and charter programs are not the only way to share jets under Part 91.501, however. FAA regulations also permit wet leases for limited compensation, called “timeshares”; aircraft exchange agreements, called “interchanges”; and even joint-ownership arrangements that permit one registered joint owner to operate an aircraft for the other owners. Finally, there’s “co-ownership,” where each owner of the aircraft (or an affiliate) operates it for itself.

Co-ownership has a special appeal for people who don’t like the idea of flying around on business jets owned, operated, and maintained by somebody else. With co-ownership, you can still control how the aircraft is equipped, operated, and cared for, and you can cut your costs significantly because you share the fixed operating expenses like crew salaries, hangar rent, and maintenance charges with the other owners.

A major difference between share and charter programs, on the one hand, and the joint and co-ownership options on the other, is locating people to do business with. Buy a NetJets share or a Wheels Up membership and the company will provide the other riders that make the program work economically. But how do potential jet co-owners find each other?

They could put ads in a newspaper. FAA common carriage rules are a significant stumbling block to “holding out” to the public a willingness to share rides or do timeshares, but you can hold out all you want for someone to co-own part of your airplane.

However, now you may not have to; a company called Partners in Aviation (PIA) will help you locate someone or something to share jet ownership. PIA basically creates a network of clients who can afford to own a business jet but can’t justify it to themselves financially for flying, say, only 100 hours per year. They then discuss the prospects on a no-names basis, including location (preferably within 20 to 30 minutes for positioning), preferred type of aircraft, anticipated annual usage, and the like. If it looks as if two owners would work well together, PIA introduces them to each other.

In the company’s basic model, just two parties split the fixed cost of owning the aircraft equally. One of the parties may be providing the aircraft, in which case it would sell half of it to the other party, or the parties may (with PIA’s help) go out and buy an aircraft together. The owners are then responsible for the direct operating costs of their own flights, including positioning. As in most co-ownership arrangements, there’s a true-up at year-end based on actual usage.

Of course, when you own anything with somebody else, you need to work out many issues, but an advantage of using a company like PIA is that someone is in the middle to mediate. PIA wants each owner to acquire its interest in an entity, not use a partnership or individual ownership structure, and to hire a reputable management company to help operate the aircraft for both owners. Prospective owners will need to retain aviation counsel, and an acquisition consultant and tax advisor may be required as well.

One of the thorniest co-ownership issues is the exit strategy. PIA contemplates a three-year contract, with a penalty for a party that wants to terminate early. That’s probably unusual for co-ownership agreements generally. Many such arrangements are between friends or people who know each other and who don’t worry a lot about splitting up, but that’s not necessarily a good thing. Owning an aircraft with a friend can spell the end of the friendship.

In a typical co-ownership arrangement, if an owner wants out, the other owner has a right of first offer and/or first refusal to buy out the share. If the other owner declines, then they basically have to sell the aircraft, for unless you’re a share program, it’s difficult to sell a piece of an aircraft, though you could always try to find another partner.